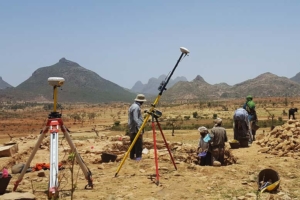 Archaeologists have discovered an ancient buried town in Ethiopia that was inhabited for 1400 years. The town was part of a powerful civilisation called Aksum, which dominated east Africa for centuries and traded with other great powers like the Roman Empire.

“This is one of the most important ancient civilisations, but people don’t know it,” says Michael Harrower of Johns Hopkins University in Baltimore, Maryland. “Outside of Egypt and Sudan, it’s the earliest complex society or major civilisation in Africa.”

The Empire of Aksum dominated east Africa and parts of Arabia from about 80 BC to AD 825. It was one of the major powers of the time, alongside Rome, Persia and China. Its capital, also called Aksum, still exists and has many tall stone obelisks.

Nobody knows how the Aksum civilisation developed. It was preceded by a “pre-Aksumite” society, the name of which is unknown. This earlier civilisation may have been centred around Yeha in northern Ethiopia, which has the oldest writing and standing architecture in sub-Saharan Africa. So Harrower and his colleagues have surveyed the surrounding area.

After discussions with local people, the team began excavating a hill near a village. They found a grid of stone walls: the remains of buildings.

“That’s what’s great about Ethiopia,” says Harrower. “In Greece and Rome a lot of places have been explored and studied, so there’s not a lot of discoveries of major ancient towns any more.”

They called the town Beta Samati, which means “house of audience” in the local Tigrinya language.

The find is “highly significant”, says Jacke Phillips of SOAS University of London in the UK. “Most of our known Aksumite and pre-Aksumite sites are old excavations, hastily conducted and badly published by today’s standards.”

Radiocarbon dates of the site span 771 BC to AD 645. That means Beta Samati existed during the pre-Aksumite period and was continuously inhabited throughout the rise of Aksum. For Harrower and Phillips, this implies pre-Aksumite settlements were not abandoned when Aksum arose, and that there may not have been a sharp political break between the two, as archaeologists previously suspected.

Beta Samati contains many small buildings, either houses or workshops. There is also a large rectangular building identified as a “basilica”. In the Roman Empire, basilicas were originally used for public administration and courts, and later as places of Christian worship.

Aksum originally had a polytheistic religion, influenced by traditions from the Saba kingdom in what is now Yemen. However, during the 300s King Ezana converted Aksum to Christianity, so the basilica may have been built as a Christian church. In line with this, the team has found a stone pendant marked with a Christian cross.

The team also found a ring, made of copper alloy covered with gold leaf, and bearing a red stone called a carnelian engraved with the image of a bull’s head over a vine or wreath. “It looks a lot like a Roman ring, except for the style of the bull insignia,” says Harrower.

It may be that Aksum rulers brought in Roman craftspeople and instructed them to adapt Roman designs to suit Aksum culture, Harrower says. Archaeologists have long known that Aksum was a major trading civilisation, exporting gold, ivory, elephants and baboons.

The trade evidently reached Beta Samati. The team found amphorae, probably used to store wine, which seem to come from Aqaba in what is now Jordan, and a glass bead probably from the eastern Mediterranean.

Because these cookies are strictly necessary to deliver the website, refuseing them will have impact how our site functions. You always can block or delete cookies by changing your browser settings and force blocking all cookies on this website. But this will always prompt you to accept/refuse cookies when revisiting our site.