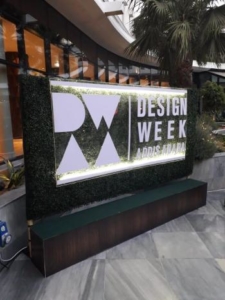 Addis Ababa is determined to rebrand itself as a global city, with a hi-speed train and high-rise buildings quickly replacing its old-world charm. Part of what will maintain its distinction is the proper recognition of Ethiopia’s historic culture.

And why shouldn’t the city market its culture to the world, and its own citizens, asks Design Week Addis Ababa founder, Metasebia Yoseph.

Yoseph was born and raised in the United States but joined the returning Ethiopian diaspora in 2013. With art history as a major, she came back to gain work experience in the national museum but found that Ethiopia’s cultural and historical artifacts were often neglected. She returned to the US to complete a graduate degree in communication and came back to convince Ethiopian businesses that what they need was a good PR strategy.

It was a hard sell, but the 35-year-old convinced an old family business to start a Facebook page. It was Ethiopia’s weavers, carpenters and your designers reinventing an old craft that she was more interested in selling, though. Local businesses would rather work with suppliers in Dubai or Cape Town “because that is being perceived as the best.”

“This disconnect between the commercial, creative and cultural was really what I was trying to fill the gap in,” she says.

Yoseph started Design Week Addis Ababa in 2015, mostly out of her own pocket with one sponsor on board, French beverage giant Castel, who produce Ethiopia’s Rift Valley wine.

This year was a turning point though: political optimism under president Abiy Ahmed has brought more attention to Ethiopia’s capital. Tourism Ethiopia has come on board, designating it as a “destination event,” and Heineken signed up as an event sponsor.

Design Week Addis Ababa (this year Feb.11 to Feb. 17) is still growing. The average event traffic is about 150 at most and the entrance is free, compared to the more established Design Indaba in South Africa which charged nearly $620 for a three-day pass and host hundreds of guests. Exhibiting designers, like Zimbabwean designer Sekai Sandamu paid a nominal fee to bring her Kaisan range to potential Ethiopian buyers.

It opened and closed with an event and exhibition space typical of design weeks, launching at the newly opened Hyatt hotel. For the rest of the week, it partnered with other brands and organizations to host satellite events on the design week platform. One of those is Yenaé jewelry, who used Design Week Addis Ababa to launch their line in Ethiopia.

“There isn’t that much knowledge about designs and what forms they come in and I think Design Week created that platform,” says the line’s co-founder Felekech Baratu.

Yenaé is a delicate yellow and white gold jewelry line that draws on the designers’ Ethiopian and Eritrean history, with the symbols immediately recognizable as Orthodox crosses. The brand was conceptualized between Ethiopia and the United States, where co-founder Seble Alemayhu lives and the jewelry is crafted. Once they grow a presence in Ethiopia, the aim is to build a localized production line and eventually showcase other African cultures.

This is a problem Yoseph says she’s often encountered with local artisans—the lack of reliable prototyping, production, and then of course distribution. This push for modernization doesn’t sit well with some. Locals who haven’t even heard of Design Week Addis Ababa voice concern about returnees reinventing cultural heirlooms that are still a part of daily life. Yoseph may be recreating an international design week model, but it’s very much with Ethiopia at the center.