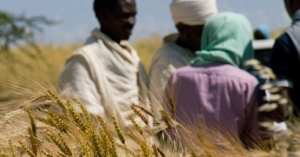 In the context of rapidly evolving climate conditions, a new study by Bioversity International and partners addresses the challenge of climate adaptation in a way that is both scalable and targeted. The scientists have demonstrated a unique approach using crowdsourced citizen science that capitalizes on farmers’ knowledge.

Crop adaptation to climate change has become an increasingly necessary and also risky task for smallholder farmers. Farmers need access to crop varieties and recommendations on the variety best suited to their local conditions. And they need it fast. But existing approaches to generate recommendations in marginal production environments lack two essential factors: scalability and the ability to generate recommendations that are representative of the environments and conditions under which farmers grow crops in their fields.

“This work started with the idea that in the agricultural sciences, we could learn from ecologists and environmental scientists who get massive feedback from citizen scientists,” explains Jacob van Etten, senior scientist at Bioversity International and lead author of the paper. Bird ecologists compile data obtained from the observations of bird watchers into a large database. This allows them to trace bird movements and understand how climate change affects migration patterns. With so many data-contributing bird watchers, ecologists can track the impact of climate change as it happens. “It occurred to us that we need a similar citizen science approach in agriculture to help farmers to adapt to climate change.”

The researchers applied a citizen science approach recently developed by Bioversity International called tricot—triadic comparisons of technologies—by which each farmer plants seeds from a test package of three varieties randomly assigned from a larger pool of varieties. The researchers organized the tricot trials over different seasons and landscapes to obtain a unique dataset covering 842 plots of common bean in Nicaragua, 1,090 plots of durum wheat in Ethiopia and 10,477 plots of bread wheat in India. Scientists then linked the farmer-generated data with agroclimatic and soil data.

The format allowed even those with low literacy skills to contribute their evaluation data through various channels, including mobile telephones. “We used climatic data to try to explain why certain varieties perform better than others,” says Kauê de Sousa, a research fellow at Bioversity International and one of the joint lead authors of the study. “The results were very interesting. Farmers were clearly able to distinguish stress-tolerant varieties. We could also generate variety recommendations for different agroclimatic zones.”

To assess what the tricot trial results mean in practice, the scientists contrasted them with existing recommendations, which in the case of the Ethiopian highlands were for modern wheat varieties. The tricot trials produced more geographically specific recommendations, and demonstrated the superior performance of farmer varieties that were approved for official release in March 2017.

The farmer-generated recommendations improved existing approaches. They can be directly translated into actionable information for climate adaptation on the ground, and can be used to create variety portfolios or, if combined with seasonal climate forecasts, climate information services to further diminish climate risk.

The novelty of this study is the demonstration that in vulnerable, low-income areas, climatic analysis of variety performance is possible using data generated directly by farmer citizen scientists on farms. The unique contribution of the tricot approach is that it integrates aspects of the existing approaches into a simple format that addresses the challenge of climate adaptation in a way that is scalable and targeted.

“This study confirms that our initial hunch was correct—citizen science can help farmers with climate adaptation. It also shows the enormous potential of citizen science in agriculture,” says van Etten. “It opens a whole new area of possibilities.”