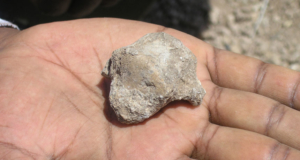 Fossils unearthed from an Ethiopian site not far from where the famous hominid Ardi’s partial skeleton was found suggest that her species was evolving different ways of walking upright more than 4 million years ago.

Scientists have established that Ardi herself could walk upright (SN Online: 4/2/18). But the new fossils demonstrate that other members of Ardipithecus ramidus developed a slightly more efficient upright gait than Ardi’s, paleoanthropologist Scott Simpson and colleagues report in the April Journal of Human Evolution. The fossils, excavated in Ethiopia’s Gona Project area, are the first from the hominid species since 110 Ar. ramidus fossils, including Ardi’s remains, were found about 100 kilometers to the south (SN: 10/24/09, p. 9).

Gona field surveys and excavations from 1999 through 2013 yielded Ar. ramidus remains, including 42 lower-body fossils, two jaw fragments and a large number of isolated teeth. Several leg and foot bones, along with a pelvic fragment, a lower back bone and possibly some rib fragments, came from the same individual. The same sediment layers, characterized by previously dated reversals of Earth’s magnetic field, contained fossils of extinct pigs, monkeys and other animals known to have lived more than 4 million years ago.

Unlike Ardi, the fossil individual at Gona walked on an ankle that better supported its legs and trunk, says Simpson, of Case Western Reserve University in Cleveland. And only the Gona hominid could push off its big toe while striding on two legs.

Still, Ardi shares a style of movement with the 4.8-million- to 4.3-million-year-old Gona hominids that is unlike that of any other hominid or living primate, the researchers say. The fossils found at Gona and at Ardi’s site suggest grasping, opposable toes, flat feet and other skeletal features that would have made Ar. ramidus a capable, but not acrobatic, tree climber, probably limited to moving on all fours across low-hanging branches. Ardi’s kind was also built for walking slowly over relatively short distances.

“I had a tough time seeing Ardi evolving into Australopithecus, but the Gona fossils make that transition easier to envision,” says paleoanthropologist Jeremy DeSilva of Dartmouth College, who did not participate in the new study. In particular, the shape of an Ardipithecus ankle bone from Gona shows that its foot, unlike Ardi’s, was positioned directly under the shin bone, as in people today.

The discoveries at Gona strengthen the argument that Ardipithecus represents the best available model for what the last common ancestor of humans and chimps looked like, Simpson’s group contends (SN: 1/16/10, p. 22). Some researchers regard living chimpanzees as reasonable examples of a last common ancestor. Yet Ardi and her Gona cohorts, among their many nonchimplike characteristics, display no signs of knuckle-walking or being able to swing by their arms through trees. So evolutionary predecessors of Ardi’s kind were unlikely to look much like chimps, Simpson says.

DeSilva agrees, but adds that too few fossils from 5 million to 9 million years ago have been found to clarify what the last common ancestor of human and chimps actually looked like.

Because these cookies are strictly necessary to deliver the website, refuseing them will have impact how our site functions. You always can block or delete cookies by changing your browser settings and force blocking all cookies on this website. But this will always prompt you to accept/refuse cookies when revisiting our site.