Ecologists are working with the nation’s Tewahedo churches to preserve these pockets of lush, wild habitat.

These small but fertile oases — which number around 35,000 and are dotted across the country — are some of the last remaining scraps of the tall, lush natural forests that once covered Ethiopia, and which, along with their biodiversity, have all but disappeared. 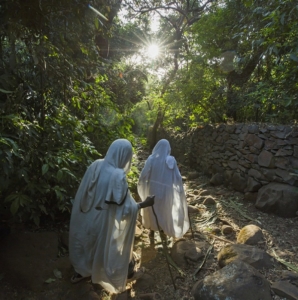 If you see a forest in Ethiopia, you know there is very likely to be a church in the middle, says Alemayehu Wassie. Wassie, a forest ecologist, has spent the past decade on a mission: preserving, documenting and protecting the unique biodiversity in pockets of forest that surround Ethiopia’s orthodox churches.

These small but fertile oases — which number around 35,000 and are dotted across the country — are some of the last remaining scraps of the tall, lush natural forests that once covered Ethiopia, and which, along with their biodiversity, have all but disappeared.

Much of the nation’s forestland has been sacrificed to agriculture to feed the country’s mushrooming population — at more than 100 million, it is the world’s 12th largest. Deforestation was particularly encouraged during the country’s period of communism, in 1974–91, when the government nationalized the land, including the large estates of the church, and distributed it to people who converted swathes to farmland. Just 5% of the country is now covered in forest, down from 45% in the early twentieth century.

In the past few years, small international research programmes have started to document the depleted biodiversity. Wassie, who has long championed conservation work in the northern highlands of the country where he grew up, has forged an unusual collaboration with the Ethiopian Orthodox Tewahedo Church to try to save the forests.

The project is a work in progress, says Wassie. But now, local residents, along with their priests, are helping to slow attrition of their church forests.

The church, to which more than half of Ethiopians belong, views the natural forest as a symbol of heaven on Earth, where every creature is a gift from God and needs its habitat.

“It’s a remote part of the world, where the natural environment has become part of the spiritual environment,” says Christof Mauch, director of the Rachel Carson Center for Environment and Society at the University of Munich, Germany. “It is culturally, as well as scientifically, important to save these pockets of forests,” he says.

About 80% of Ethiopia’s people live in rural areas and rely on subsistence farming.

Growing more food has been necessary, says Wassie — Ethiopia has had many famines. “But productivity could have been increased by using technologies rather than expanding farmland,” he says. Reforestation efforts in Ethiopia have planted monocultures of eucalyptus, which need much more water than indigenous trees.

Forest biodiversity is important for agriculture because many of the birds and insects that populate the church woods pollinate crops and control pests, says Wassie. “We don’t know how much diversity has been lost,” he says. “But it appears there is a very significant amount left — more than we expected.”

The church forests — cooler and more humid than those in the lowlands — can range from 3 to 300 hectares and host evergreen trees, shrubs and flowering plants such as Justicia and Diospyros. They also sequester carbon, conserve water, reduce soil erosion and provide natural medicine.

For priests and local populations, they provide shelter for buildings, space for contemplation and prayer, and burial areas.

Nearly 1,500 of the forests are in the South Gonder region, where Wassie was born in 1971.

He says his primary education in the local religious school ingrained in him a deep and abiding affinity for the church. But his love of nature and science led him to an academic career in forest ecology. He studied in Europe, and is now an adjunct professor at the Bahir Dar University in South Gonder, some 300 kilometres north of Addis Ababa.

When Wassie first started surveying the forests in the early 2000s — counting individual species and saplings — priests didn’t understand why he was doing his work, says Wassie. “It appeared to them to have no advantage to the church or the community.”

By the time he had finished his PhD thesis in 2007, at Wageningen University in the Netherlands, he had documented vegetation diversity in 28 church forests in South Gonder.

But he was feeling gloomy about his future — finding funding or local collaboration was proving difficult. Then, that year at a meeting of the Association for Tropical Biology and Conservation in Morelia, Mexico, he met Meg Lowman, a forest ecologist at the California Academy of Sciences in San Francisco, who was moved by his despair. They became “lifelong conservation soulmates”, she says, and began working together to raise money and to win the trust of the church’s priests.

With modest grants from the National Geographic Society in Washington DC, Wassie and Lowman began a series of workshops to educate priests about their conservation work and its importance. They took slide projectors to villages and showed them Google Earth’s bird’s-eye views of their churches. The dots of green scattered across arid plains gave the priests a perspective shift, says Lowman, as they saw the vastness of the forest loss contrasted with the treasure they had helped to preserve.

“The priests gave us limited permission to enter the forests and take samples,” says Wassie.

The pair have since organized various research activities to catalogue species of birds and insects in the forests, inviting international experts to help in identification.

Wassie has now surveyed the vegetation in more than 40 church forests.

Another part of the project involves encouraging church communities to build protective stone walls around their woods to save them from damage. Despite taboos about disrupting the forests, local people sometimes allow their animals to enter and graze on the undergrowth and saplings, or hunt for food there themselves. They often gather wood from the forests’ edges and allow their ploughs to damage vegetation.

Lowman and Wassie offer cash donations to churches that manage to build protection — 15 or so churches have now constructed walls. And some priests have become stewards of their forests and encouraged local people to help build conservation walls. Many now volunteer time to remove stones from fields for construction, which is also good for crop yields.

Some churches are also trying to extend their forests to invigorate their communities, says Wassie — a promising indicator for his conservation ambitions.